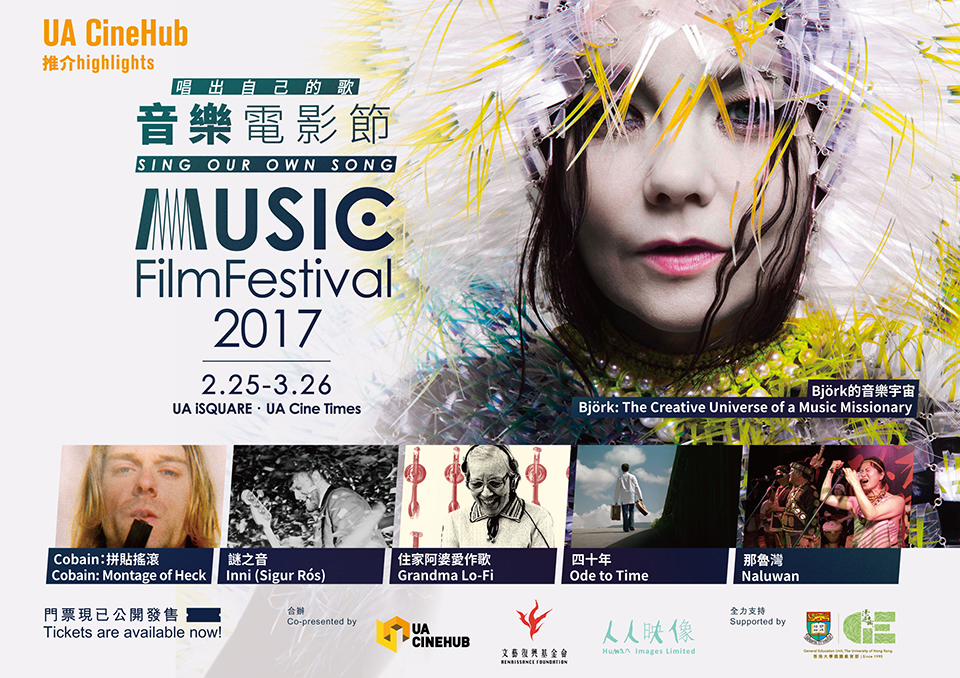 Sing our own songs.

Join us. Visit the majestic world of Iceland through the eyes of music giants Sigur Rós and Björk, but also see another side of the country through unassuming lo-fi tunes sung by Icelandic natives. Go back and relive 90's Seattle grunge through the short but brilliant life of Nirvana frontman Kurt Cobain. Or explore the 30 year long revolution of Mainland rock, and the 40 plus year aboriginal folk song movement of Taiwan. Roots in one's own land, let the indies ring.

This 2017 spring, turn music up in the theatres.

Terms and Conditions :
．Please note that the screenings at iSquare can only be purchased at iSquare, Cine Times will not sell tickets to be shown at iSquare and vice versa.
．Each member could purchase an unlimited number of discounted tickets.
．Please bring along your membership card to the screening, you might be asked to show your membership card upon admission.
．The discount is not available for internet booking, mobile app booking and credit card telephone booking.
．The discount cannot be used in conjunction with other discounts.
．The Presenters reserve the right of final decision in event of dispute.

RF members who did not get their membership cards could contact us at This email address is being protected from spambots. You need JavaScript enabled to view it. .

At the height of his career, Nirvana front-man Kurt Cobain committed suicide at the age of 27. His death deeply affected his legion of fans, many of whom saw him as the John Lennon of the 1990s. As Cobain himself had said, the most classic rock ‘n roll story ends with the sudden death of a band’s lead singer. This film contains a wealth of personal material, such as Cobain’s home videos, recordings, diary, notes, sketches, concert footage, and interviews with former Nirvana band-mates as well as Cobain family members, plus hazy animation clips, together make up a detailed portrait of Cobain’s brief and tragic life. Growing up in a broken home, Cobain was extremely sensitive, rebellious, lonely, self-destructive and vulnerable. When Nirvana became popular, he did not know how to handle his success. He felt misunderstood by the press, and told reporters that he did not want to be famous and only wanted to make good music. Plagued by persistent stomach pain, depression and heroin addiction, plus constant emotional turmoil with wife Courtney Love, Kurt regretfully took his own life, leaving us with this brutally honest and mesmerizingly beautiful document by which to remember him.

The celebrated Icelandic band Sigur Rós preserved a record of their London concert (with four of their members present) with this release, which New York Times hailed as being among the best concert movies. The director skilfully mixes the band’s post-rock sound with black-and-white photography into a dazzlingly beautiful and haze-like dreamscape. The film’s unique texture was created by digitally re-filming the projected 16mm film, which was transferred from a high-definition version of the concert footage. Edited together with rare footage taken of the band over the ten years since its formation, Inni represents a poignant record of Sigur Rós. Experiencing the film on the big screen, one cannot help but be sensually immersed in its poetic glory.

Musician, actress, visionary, video artist, composer – Björk is one of the most versatile and influential artists of our time, tearing down the limits of art genres and constantly redefining the process of creating music. For three decades now Björk knows how to use the power of images and her own art persona to inspire unforgettable emotions. Her music videos are unique collaborations with a wide range of artists, such as Michel Gondry and Chris Cunningham. This film shows why the Icelandic artist is bound to re-invent herself over and over: Björk is a missionary. Probably the most creative that ever was.

At the tender age of 70 she started recording and releasing her own music straight from the living room. 7 years later she had 59 albums to her name with more than 600 songs – an eccentric myriad of catchy compositions mixing in her pets, found toys, kitchen percussions and Casio keyboards. Sigrídur Níelsdóttir is her name, and before long the Icelandic/Danish musician became an adored cult figure in the Icelandic music scene. Shot mostly on Super-8 and 16mm, Grandma Lo-Fi is a cinematic tribute to her boundless creativity, created by three musicians and artists whom she inspired, including Ingibjörg Birgisdóttir, the album art artist for Sigur Rós’s Valtari and Sóley’s We Sink, etc.

After four decades, a group of veteran singers gather together again. The songs they wrote when they were young had once changed the fate of the island. However, time took away their youth and changed the island’s soul. Can the innocent songs they sang back in the old days still be related to the new era? Or could they speak for only the souls of a particular generation?
On that memorable night in history, the veteran singers are re-united and sing those beautiful songs they wrote forty years ago. The unpredictability in life, the cruelty of fate are gradually revealed in their singing.

The aborigines of Taiwan are the most ancient and long-standing inhabitants of the island. Now living under a Han-dominated society, they face unprecedented problems that threaten their survival and cultural identity. This film focuses on three distinctive indigenous singers who touch their fellow people, the general Taiwanese population and foreigners alike with their moving and infective folk music which expresses their deep emotional ties to their homeland and their love for the island. Naluwan is a moving portrait of a proud people who, despite their difficulties, fearlessly defend and protect their unique and precious language, music, culture and homeland.

The birth of China's Rock 'n' Roll in the 80s was a history not too long ago. The pioneers with warmth and simplicity who wanted to change the world, where are they now? Smells Like Teen Spirit interviewed more than 20 most significant figures in Mainland rock, including Cui Jian, Wang Feng and Zheng Jun. Top icons share what they have passed through and review the development of Rock 'n' Roll in China.
A 30-year-old man should be a grown-up. But the 30 year long revolution of Mainland rock still smells like a teenager. It is just the beginning and there is still plenty to be expected.